Shareholders to present slate of proposals at Amazon annual meeting

A group of socially responsible investors, many of which are members of the Interfaith Center on Corporate Responsibility, today announced that they will have a total of nine proposals on the proxy ballot at Amazon’s (Nasdaq: AMZN) May 22nd annual meeting in Seattle. Unaffiliated shareholder filed an additional three proposals, not highlighted here, bringing the total number of shareholder-sponsored proposals to 12.

The investors filed their resolutions independently and on a variety of environmental, social and governance concerns. The investors say the volume of proposals illustrates how the company’s unprecedented growth and global influence over multiple sectors and supply chains makes it vulnerable to reputational, competitive, financial, and regulatory risks.

“Amazon’s growth over the past five years has been astounding,” said Jared Fernandez of Green Century Capital Management. “While Amazon is now neck-and-neck with Apple as the most valuable public company in the world, its lack of attention to a number of broad environmental, social and governance risks poses legitimate questions about the continued success and resiliency of the company.”The nine proposals are as follows:

Collectively, the investors say the resolutions provide ample evidence that Amazon does not have the appropriate risk mitigation structures in place. To read the full resolution texts, see the Amazon proxy statement.

One of the concerns articulated in the group of proposals relates to the risks of human/civil rights abuses resulting from the sale of Rekognition, Amazon’s facial recognition technology, as well as the company’s failure to appropriately monitor the sale of offensive, racist products through its e-commerce platform.

“We are concerned by sales of Rekognition to government in the United States and globally because this highly controversial technology poses tremendous risks involving civil and human rights and government surveillance, as well as legal, financial, and regulatory risks to Amazon,” said Sr. Pat Mahoney of the Sisters of St. Joseph of Brentwood who filed the proposal in coordination with Open MIC.   “Shareholders are encouraged to support resolution #6 calling for a ban on sales of Rekognition to government and #7 calling for an independent study – the risks to communities and the company are too great to move forward.”

Said Laura Campos of the Nathan Cummings Foundation which filed the proposal on Amazon’s efforts to address hate speech, “There appears to be a gap between Amazon’s policy on offensive and controversial materials and its practices. As investors, we’re concerned that by making offensive products available on its platforms, Amazon could be exposed to reputational damage which could impair relationships with key stakeholders, including customers and employees. These apparent gaps, along with the other issues raised by investors in this year’s proxy, point to a company in need of board-level attention to a range of significant environmental and social issues.”

"To date, Amazon has failed to adequately address the issue of hate speech,” added Maurice BP-Weeks of the Action Center on Race and the Economy (ACRE). “As the company with the largest market cap, and with hate speech on the rise globally, Amazon should report immediately on its efforts to address the hate speech and sales of offensive products on its website as documented in the Delivering Hate report.”

The company’s climate impacts were also called out by investors as presenting serious risks, since Amazon’s extensive supply chain leaves an enormous carbon footprint. One proposal cites food waste as a critical concern given Amazon Fresh and Amazon Direct online grocery sales as well as its acquisition of Whole Foods. Another resolution filed by Amazon employees calls out the company’s reliance on fossil fuels.

Amazon’s record on the gender pay gap is the source of another resolution filed by Arjuna Capital.

“When we first pressed Amazon to publish its gender pay gap three years ago, the company went to the SEC to try to block the proposal from going to a vote of shareholders,” said Natasha Lamb of Arjuna Capital. “Fortunately, the company lost, but that kind of defensive approach gets us nowhere.  Ignoring material investor concerns is not good for anyone—customers, the company, or investors. This year, we are asking Amazon to take a more proactive stance on pay equity and publish its median gender and racial pay gap, not only because it the right thing to do, but because it is in its enlightened self-interest to do so.”

Investors sent a joint letter to Amazon in November of 2018 which underscored concerns and requested meaningful dialogue with management.  The letter was endorsed by 114 investors representing over $2.6 trillion in AUM, many of whom had varying degrees of prior engagement with Amazon.

Regarding investors’ attempts to engage with the company the letter stated:

In our experience, Amazon has purposefully avoided constructive and substantive dialogue with its shareholders, often necessitating the filing of shareholder resolutions. In contrast, many of the shareholder dialogues conducted by the undersigned investors span several conversations, over multiple years, with corporate decision-makers who are receptive to investor concerns regarding business risks.

Also striking was Amazon’s decision to petition the SEC to omit many of the proposals from its proxy. The investors say the fact that the company has actively sought to avoid addressing these problems in a constructive manner with the investment community is highly troubling.

Concluded Fernandez, “While all the proponents have their individual reasons for filing these proposals, as a group we are motivated by the same underlying concern: mitigating risk to ensure the operational sustainability of the company.”

Beyond the annual meeting on May 22nd, investors say they will continue to request regular dialogues and stress the need for more authentic stakeholder engagement to reduce Amazon’s risks and make progress on some of the most pressing issues of our times.

About the Interfaith Center on Corporate Responsibility (ICCR)
Celebrating its 49th year, ICCR is the pioneer coalition of shareholder advocates who view the management of their investments as a catalyst for social change. Its 300 member organizations comprise faith communities, socially responsible asset managers, unions, pensions, NGOs and other socially responsible investors with combined assets of over $400 billion. ICCR members engage hundreds of corporations annually in an effort to foster greater corporate accountability. www.iccr.org 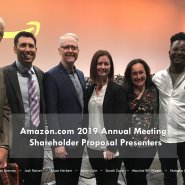