In a letter sent to oil and gas companies, a group of investors warned against the Environmental Protection Agency’s (EPA) proposed rollback of the New Source Performance Standards (NSPS), a regulation the investors say is critical to the long-term viability of the oil & gas sector in the energy transition already underway.

Over 610 different companies accounted for 50% of U.S. oil and gas production in 2017. While most of the companies receiving the letter have responded positively to investor engagement on methane management, there are hundreds of companies that are not managing methane emissions carefully, which threatens the reputation of natural gas as a ‘cleaner’ fossil fuel.  A study earlier this year in the journal Science estimated that in the U.S., methane equivalent to 2.3 percent of all the natural gas produced in the nation leaks into the atmosphere during the production, processing and transportation of oil and gas every year.

“Natural gas is often touted as a ‘transitional’ fuel, yet methane is a powerful climate forcer up to 86 times more powerful than carbon dioxide in the short-term,” said Steven Heim of Boston Common Asset Management. “In the face of ever more dire reports on the economic and public health tolls of global warming, investors view these regulations as critical bulwarks to stave off catastrophic climate change. Given the EPA’s wavering, we need the support of the industry to keep these regulations in place.”

The investors assert that strong and fair methane regulations, which require companies to conduct regular inspections for leaks and report on their methane management efforts, create a more stable environment by leveling the playing field among U.S. oil & gas companies. As the U.S. is a net exporter of natural gas, and as an increasing number of countries adopt legislation and other policies to address climate change, the investors stress that sound methane regulation preserves the industry’s global competitiveness. According to the recent IPCC report, countries won't be able to limit global warming to 1.5 degrees Celsius above pre-industrial levels, considered by some scientists and policymakers to be the "safe" limit of climate change, without immediate and rapid reductions in a wide range of greenhouse gases, including methane.

In 2015, ICCR launched a concerted methane campaign with the goal of engaging primarily U.S. companies across the natural gas value chain on improving disclosure, reducing emissions and reporting critical information on methane management efforts, such as leak detection and repair (LDAR). If the EPA is successful in rolling back the NSPS, LDAR, currently one of the most cost-effective ways to curb dangerous methane emissions, will be significantly weakened which, investors say, benefits no one.

“Forward-looking companies have not spoken up in support of existing rules, nor have they asked their trade associations like the American Petroleum Institute to stop supporting these senseless rollbacks. Investors find this lack of true transparency concerning and would like to see companies demonstrate fulfillment of their commitments to methane advocacy,” said Lila Holzman with As You Sow.

Apart from publicly declaring their support for the NSPS Rule, the investors are asking companies to submit comments to the EPA regarding the benefits of industry-wide methane regulation by December 17th.

“The companies receiving the letter are large producers representing 35% of U.S. oil and gas production,” said Rob Fohr of the Presbyterian Church, USA.  “Our hope is to convince these more influential companies to use their voices in support of sensible and cost-effective methane regulation to bring along the entire industry and mitigate the risk of an unregulated market.”

A link to the investor letter and signatories as well as a list of the companies receiving the letter can be found at this link.

About the Interfaith Center on Corporate Responsibility (ICCR)
Celebrating its 48th year, ICCR is the pioneer coalition of shareholder advocates who view the management of their investments as a catalyst for social change. Its 300 member organizations comprise faith communities, socially responsible asset managers, unions, pensions, NGOs and other socially responsible investors with combined assets of over $400 billion. ICCR members engage hundreds of corporations annually in an effort to foster greater corporate accountability. www.iccr.org

The Investor Campaign on Methane 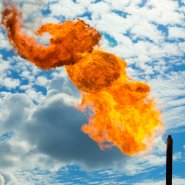