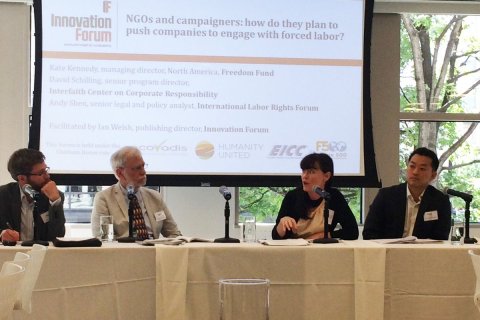 Estimates of the number of those trafficked into forced labour and slavery globally range from 21 million to 46 million persons.  Behind these staggering statistics are human beings – women, men and children – with aspirations for a better life. This egregious human rights violation occurs in every global supply chain today. This phenomenon of job-seekers being unwittingly recruited into slavery is underreported.  It is one thing to report the statistics and another to come face-to-face with the reality.

While in Dubai in March to participate in an AIM-PROGRESS training of suppliers on ethical recruitment, I met a worker from Bangladesh who travelled to the United Arab Emirates to secure a good-paying job to support his family. In order to pay the labour recruiter who had promised him a job, his family sold their home. Now he is stuck in a job paying far less than he imagined, with little hope of earning enough to send remittances back to his family. 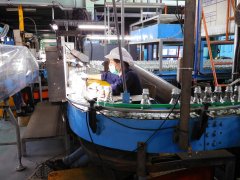 Through the payment of fees, the confiscation of passports and other personal papers and the lack of written contracts spelling out terms and conditions of employment, workers are all too often robbed of their freedom and their dreams. Exploitative labour recruiters play a destructive role in trapping workers in debt and putting them at risk of other human rights abuses. Transforming the current labour recruitment system will require informed, collective action by governments, international institutions, companies, trade unions, non-governmental organizations and investors.

Today, investors are much more aware of the risks faced by migrant workers and the risk companies face from poorly managed supply chains where human rights abuses may tarnish a company’s reputation and adversely impact long-term value. Media reports of specific abuses coupled with new corporate reporting requirements – such as the U.K. Modern Slavery Act, the California Transparency in Supply Chains Act, the U.S. Executive Order, “Strengthening Protections Against Trafficking In Persons in Federal Contracts” – have elevated forced labour and labour recruitment as issues that need to be tackled head-on and properly integrated into investment decisions.

The Interfaith Center on Corporate Responsibility (ICCR) – a coalition of 300 member organizations comprised of faith communities, socially responsible asset managers, unions, pensions, NGOs and other socially responsible investors – has identified the eradication of modern slavery as a top priority.  In the last few years, ICCR members have engaged over 70 companies in six key sectors on recruitment issues.  As a result, over 20 companies have since adopted formal ethical recruitment policies covering the prohibition of worker-paid fees and confiscation of personal papers and requiring written contracts in the workers’ own language.

ICCR’s No Fees Recruitment Initiative, with the support of Humanity United, engages companies through dialogue, investor letters, shareholder resolution filing and multi-stakeholder roundtables to move companies from awareness of the problem, to implementation of collective, corrective action.  Most recently, ICCR and the Freedom Fund organized a roundtable in January 2017 that brought together companies, investors, trade unions, NGOs, government and international institutions to collectively strategize on ways to promote ethical recruitment. In response to the question about the business case for ending forced labour, one company executive said, “It is the right thing to do.”

ICCR is now also reaching out to activate ‘mainstream’ investors on this issue and is recommending they consider adopting the following three strategies to help propel further progress towards ethical labour recruitment:

1. Engage those companies who have yet to adequately address the risk of forced labour. A good place to start is engagement of companies included in KnowTheChain’s three benchmark reports.  KnowTheChain ranks 20 companies in three sectors – information, communication and technology (ICT); food and agriculture and apparel/footwear – on forced labour, including responsible recruitment. These reports are helpful in identifying those companies in a sector that are leaders and those that are falling behind. In addition, the Corporate Human Rights Benchmark (CHRB) provides scoring of 97 companies in the apparel, food products and extractive sectors on a range of human rights issues, including forced labour and responsible recruitment.

2. For those companies that have already adopted a “No Fees” policy, the focus should be on implementing emerging best practices, such as training suppliers, auditing recruitment agencies, promoting the direct hiring of workers and reimbursing fees paid by workers.  This month, ICCR released its report, entitled “Best Practice Guidance on Ethical Recruitment of Migrant Workers”, which highlights the progress made by eight companies and suppliers in implementing ethical recruitment policies and the lessons they learned that can help other companies who are just beginning to develop their own policies and practices.

3. Encourage companies to participate in promising sectoral and multi-sectoral initiatives that have the likelihood of impact. For example, the Leadership Group for Responsible Recruitment, a business-led multi-sectoral initiative, advocates for the elimination of worker-paid fees and the adoption of the ‘employer pays’ principles in ten years.  For manufacturers and retailers in the food sector, the Consumer Goods Forum’s Forced Labour Initiative focuses on implementing ethical recruitment in food supply chains.  The Electronic Industry Citizenship Coalition (EICC) is launching a new multi-sectoral, multi-stakeholder initiative, the Responsible Labor Sourcing Initiative that will focus on recruiters becoming certified as ethical recruiters through a rigorous training and assessment process.

All stakeholders, including investors, need to step up to transform the systems that enable slavery.  The challenges are many, but we are reaching an inflexion point in changing the recruitment system from an exploitative, corrupt enterprise to one that is ethical, treats workers with dignity and never puts job-seekers in a situation where they have to sell their home to obtain a well-paying job.