The Climate Deception Dossiers (Union of Concerned Scientists). For nearly three decades, many of the world's largest fossil fuel companies have knowingly worked to deceive the public about the realities and risks of climate change. Their deceptive tactics are now highlighted in this set of seven "deception dossiers"—collections of internal company and trade association documents that have either been leaked to the public, come to light through lawsuits, or been disclosed through Freedom of Information (FOIA) requests.

Exxon Feels the Heat (ICCR). Executives at ExxonMobil must be growing more anxious as the annual general meeting on May 25th approaches.

Invested in Change (ICCR). Faith-consistent investing, in a climate-challenged world.

Major Fossil Fuel Companies Knew about Global Warming... and DId Worse than Nothing (Union of Concerned Scientists)

Greens in Pinstriped Suits (The Economist)

For decades, oil companies have sowed doubt and confusion among the public about the science of climate change—even while their own scientific advisors warned of the catastrophic global warming that would accompany burning their products.

California now has the opportunity to lead the nation and tell the fossil fuel industry: deception will not be tolerated in our state. The California Climate Science Truth and Accountability Act (SB 1161), authored by State Senator Ben Allen, is a narrowly targeted, common-sense measure that would extend the statute of limitations under California’s existing Unfair Competition Law to ensure that the state attorney general can bring civil suits against companies that deceived the public about the science and risks of climate change.

SB 1161 would enable the California Attorney General, or a district attorney, to bring legal action against a business that has committed acts with respect to the scientific evidence of climate change 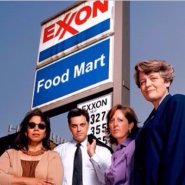 Return to the homepage.