Reflections from the 2018 Global Forum on Responsible Recruitment: Progress and Goals 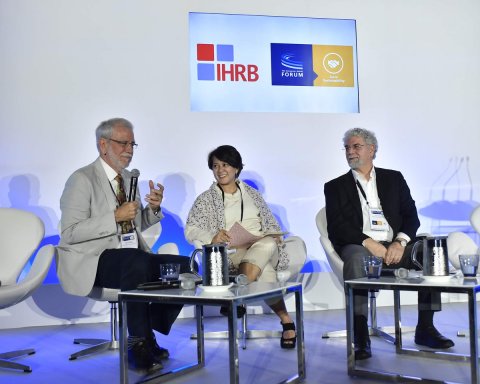 This blog originally appeared on IHRB.org

At the first Global Forum a year ago in Berlin, the Leadership Group for Responsible Recruitment (LGRR) made the decision to focus on two countries—Malaysia and Thailand (and the respective recruitment corridors) to take steps to transform the foreign migrant recruitment system from ‘worker pays’ to ‘employer pays’.  This was a significant decision to change the recruitment model through collective action in one region of the world.  There was evidence at the 2018 Forum in Singapore that this was a good decision and that some progress is being made.

The forum’s first panel on the “Experience of the Migrant Worker” made it clear that if we are to make the shift from ‘workers pays’ to ‘employer pays’, migrant workers must be at the centre of the change. Anne Beatrice Jacobs, North South Initiative, and Bhim Kumar Newar, Migrant Worker Network, highlighted the exploitative impact of worker paid fees and described the challenges to transforming the current system.  Representatives from Migrant Forum Asia (MFA), a regional network of non-government organisations, associations and trade unions of migrant workers, and a trusted partner, contributed a great deal to our understanding of on-the-ground realities facing migrant workers in specific countries in the region.

Bottom-up and top-down approaches are both needed to make systemic change.   A number of CEOs of leading companies made statements of support of responsible recruitment and more importantly are actively involved in initiatives like the LGRR, The Consumer Goods Forum’s Priority Industry Principles and the Responsible Labor Initiative of the Responsible Business Alliance. Grant Reid, CEO of Mars stated, “Success is not defined by profitability or quarterly returns but a long-term purpose-led sustainability that advances human rights.”  Andrew Forrest, chair and founder, Fortescue Metals Group, challenged CEOs to ‘provide cover’ for their staff to investigate and eliminate modern slavery in their supply chains. More corporate leaders are needed to create a critical mass of support for ending worker-paid fees.

Other signs of progress were evident in the uptake of the ‘employer pays’ principle in new sectors. The International Tourism Partnership announced its ‘Principles against Forced Labour’ at the forum which are based on the Consumer Goods Forum’s Principles. One global hotel chain representative said, “Respect for human rights and fighting exploitation is a business imperative.”

While progress is being made (it was heartening to hear that Thailand became the first Asian country to ratify the Protocol of 2014 to the Forced Labour Convention) there is so much more to be done. An often ignored area is the role of corruption in the exploitation of migrant workers.  Ray Jureidini, Hamad Bin Khalifa University, did an incredible job in explaining the difference between the actual cost of recruitment and what workers are charged for a job.  The difference is the amount a worker pays for corrupt charges—between recruitment agencies and employer representatives, whatever recruitment agencies care to charge workers for their own profit, and once at the worksite, ‘recruitment costs’ and ‘food costs’ that are deducted from wages.  Ray’s presentation included copies of an actual cash transfer and a worker’s pay slip documenting corrupt charges. To make real progress on ending worker-paid fees we must carefully think through the implications of massive corruption and whether strategies focused on banks and money laundering could get at this illegal activity.  Let’s see how far we get on this critical issue before the next Global Forum in 2019.