The Promise of COP26 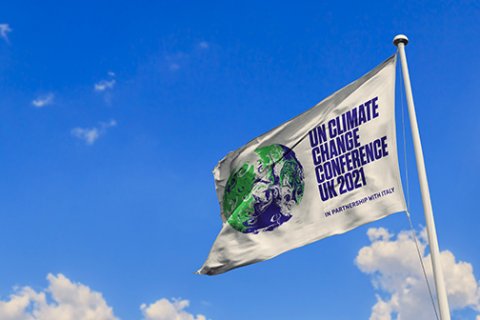 This week the majority of the world’s governments will gather in Glasgow, Scotland for the 26th "Conference of the Parties" – COP26 – to advance the goals of the Paris Climate Agreement ratified in 2015. Our hopes for this summit - and the stakes the world is facing- could not be higher.

In the 30 years since the Intergovernmental Panel on Climate Change first warned the world that greenhouse gases (GHG) were dangerously warming the global climate, GHG emissions have increased by 60 percent and the average global temperature has increased by 1.1 degrees Celsius. Already, we have seen a rapid increase in deadly heatwaves, tropical storms, droughts, and sea-level rise on every continent. The recently released United Nations Emissions Gap report  revealed that the updated climate pledges of countries headed into COP26 shave only about 7.5 percent off 2030 emissions, while a reduction of 55 percent is needed to meet the Paris Agreement target to hold warming to 1.5 degrees Celsius. While important progress has been made since the last COP, current projections signal global heating of 2.7 degrees Celsius by century’s end, a dangerous level of warming that would have catastrophic effects on food systems, on coastal cities, and on already vulnerable communities across the globe. To keep 1.5 degrees alive, governments will need to submit new Nationally Determined Contributions (NDCs) that halve global emissions by 2030 and reach net zero by 2050.

So, the question at the heart of this COP is whether the world’s governments can muster the political will to make these stronger commitments and, more importantly, whether they can then turn those commitments into principled action.

What is needed? According to the International Energy Agency’s road map for a 1.5oC economy, electric vehicles would have to make up more than half of new car sales globally by 2030, up from just 5 percent today. By 2035, wealthy countries would have to shut down virtually all fossil-fuel power plants in favor of cleaner technologies like wind, solar or nuclear power. By 2040, all of the world’s remaining coal plants would have to be retired or retrofitted with technology to capture their carbon emissions and bury them underground. This scenario would also call for an end to new fossil fuel development and new technologies would be needed to clean up sectors like air travel. A modernized grid capable of managing high levels of renewable energy production will be essential, and powerful incentives to promote a rapid transition to electric vehicles and the build-out of renewable energy needed to power them are also vital.

After the last four years, which saw the U.S. pull out of the Paris Agreement and persistent attacks on Obama-era regulations designed to reduce emissions, it is an enormous relief to see the current Administration taking climate science seriously. But the obstacles to the necessary rapid shift away from fossil fuels are formidable as evidenced by the recent debates on Capitol Hill around climate policy. Legislators heavily funded by fossil fuel companies have attacked key provisions of the budget reconciliation package that would accelerate our transition to a clean energy economy. And abroad, higher gas prices in Europe are fueling arguments that the transition will be too costly. Developing nations will struggle mightily to break their reliance on fossil-fuel energy and infrastructure and will require the world’s help.

Yet, there are also promising signs. The United States and the European Union pledged in September to reduce methane emissions – a powerful climate forcer – by at least 30 percent below 2020 levels by 2030. Regulations expected to be issued by the U.S. EPA this week will work to achieve the U.S. pledge by requiring stricter management of existing as well as new oil & gas infrastructure. ICCR members have been successfully engaging companies and federal and state agencies on the need for strong methane management and disclosure, supported by effective regulation. The best-managed oil & gas companies now are in favor of some level of regulation, a major turn-around from widespread opposition to such efforts in 2015/16. And to further fuel this progress, ICCR members are also pressing banks to ensure their lending to the private sector advances the Paris goals and have also been successfully persuading companies across sectors to align their lobbying activities with the Paris goals.

At this COP we need commitments that will speed the just transition to clean energy without sacrificing workers and communities and expect developed countries to honor their 2009 promise to mobilize $100 billion a year by 2020 to support climate action in developing countries. Strengthening the ability to adapt to climate change impacts is another important goal of COP26. With our eyes firmly trained on Glasgow this week, we send up a fervent prayer that the world's nations will commit to the difficult measures needed to pivot from our over-reliance on fossil fuels and support a rapid - and just - transition to a clean energy future.