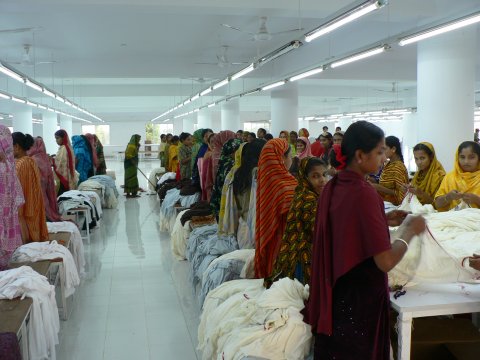 Eight years have passed since the collapse of the Rana Plaza building in Bangladesh, and we are reminded of the human rights risks inherent in outsourcing apparel manufacturing to factories with inadequate safeguards to protect workers. The jobs of 4.1 million garment workers also continue to be threatened, as global brands have either delayed payment of or canceled billions of dollars in orders, due to the COVID-19 crisis.

The Bangladesh Investor Initiative, organized by ICCR in May of 2014 in response to the tragic collapse of the Rana Plaza building outside Dhaka, has encouraged apparel companies to sign The Bangladesh Accord on Fire and Building Safety, a multi-stakeholder initiative that includes global brands, trade unions, civil society organizations and a representative of the International Labor Organization as the independent chair. Accord signatories agreed to binding commitments to make the changes necessary to ensure worker safety.

The Accord is currently set to expire on May 31, 2021, and a new agreement must be reached between global unions and brands that includes the essential elements of the Accord, or there will be no enforcement mechanism to ensure the proper functioning of the RMG Sustainability Council and no independent organization to report on its performance.

The Accord model has proven to be successful in making factories significantly more safe. With an overall progress rate of 82% and more than 650 factories at more than 90% of remediation completion, the Accord has achieved most of its safety goals.

Much has been accomplished, but more needs to be completed, since only 36% of the over 1,600 factories covered by the Accord have installed adequate fire detection and prevention systems and 50% have yet to complete worker safety trainings.

In January of 2018, the Initiative welcomed the legally-binding 3-year extension of the Accord for Fire and Building Safety. Their letter was endorsed by 147 global funds representing $3.7 trillion in assets.

On April 22, 2021, a coalition of 180 investors with over $3.7T USD in AUM organized by ICCR's Bangladesh Initiative issued a statement cautioning against allowing the Accord to expire.

Bangladesh Accord Must Not be Allowed to Expire