Freedom of Association and Collective Bargaining 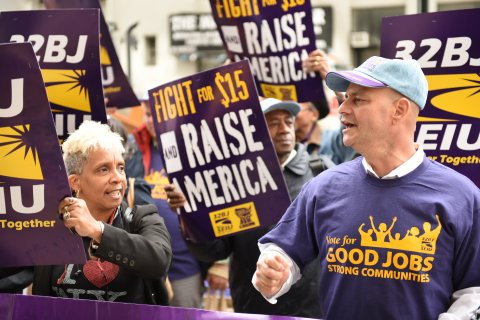 The devastating impacts of the COVID-19 pandemic on frontline workers and the resulting Great Resignation contributed to the recent boom in worker organizing as workers banded together to demand living wages and health benefits. At the same time, actions by corporations to impede worker organizing and interfere in union elections, which go against both labor laws and international human rights standards, continue to create barriers for worker movements.

Our Theory of Change

When workers can freely exercise their rights to organize and negotiate for higher wages and better protections, they have a voice in decision-making and the power to self advocate for worker-driven solutions. Investor engagement on the corporate responsibility to respect freedom of association (FOA) and collective bargaining rights is a top priority for ICCR members active in the Advancing Worker Justice program given the enabling nature of these rights.

Advancing Worker Justice Objective 1.1: Worker Voice and Freedom Of Association: Working people should have a voice in corporate decision-making and corporations are encouraged to support and implement worker-driven solutions to workplace issues.

Investors have an important role to play in showing solidarity with worker organizers by making the business and human rights case for respecting freedom of association and collective bargaining rights. Through shareholder resolutions and dialogues, ICCR’s investor members are calling on companies to adopt and meaningfully implement FOA policies, including maintaining neutrality in union elections and enforcing zero tolerance policies for retaliation against worker organizers.

ICCR’s members have prioritized several companies for shareholder resolutions on freedom of association to date, including major retailers and brands like Amazon (38.91% support), Tesla (33.40% support), Starbucks, and Apple, and the list is growing as we enter the filing season for 2023 annual shareholder meetings. These companies have a history of union-busting activities that violate worker rights, prompting legal action rising to the level of the National Labor Relations Board. ICCR’s members are committed to keeping the pressure on these companies until worker organizing rights are respected.

The Advancing Worker Justice program aims to foster intentional and equitable collaborations between responsible investors and working people, where workers are the experts. These partnerships hold investors accountable to commitments to respect worker rights through shareholder advocacy and asset allocation. Investor support for worker organizing rights is essential to a worker-centered approach to shareholder advocacy.