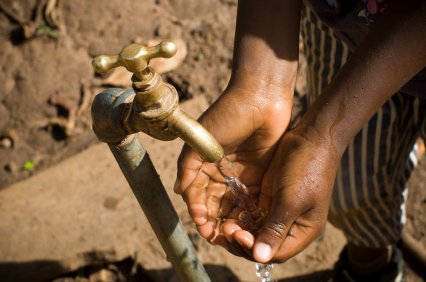 More than one in six people worldwide - 894 million – do not have access to improved water sources, and 2.5 billion people, including almost one billion children, live without even basic sanitation. Every day 6,000 children die from diseases associated with lack of access to safe drinking water, inadequate sanitation and poor hygiene.

Water is a human right recognized by the member states of the United Nations General Assembly and Human Rights Council which established the mandate to assist governments and stakeholders, including corporations, to respect, protect and fulfill the human right to water.  ICCR members highlight a number of actions that companies may take to ensure that there are policies in place that uphold the human right to water wherever they operate.

Community Voices for Global Water Justice (Corporate Examiner):  In 2013, ICCR convened a roundtable on the human right to water, bringing together investors and representatives from NGOs, community groups, and corporations.

Stakeholder Responsibilities in Managing Access to Water.  Sets out the respective rights and responsibilities regarding water use for communities, corporations, and other stakeholders.

Right to Water and Sanitation. Additional resources for individuals and investors on the human right to water.

Companies across a variety of sectors  have adopted Human Right to Water policies, including:

See the companies ICCR members are engaging on Water issues.
>>

A Country with no Water

Fahad Al-Attiya: A country with no water