As investors, we believe that just immigration policies are critical to a stable and prosperous business environment, and will promote sustainable communities.

Comment letter on proposed HUD rule on provision of housing assistance to US citizens and eligible noncitizens. Under the Proposed Rule, prorated assistance to mixed families – those containing one or more household member without eligible immigration status – would no longer be available indefinitely. Families applying to or currently in covered housing programs, including Public Housing and Section 8, would be required to document and verify the immigration status of every household member. Safe, affordable housing is human right that must respected. We urge the rule to be withdrawn in its entirety, and that HUD’s longstanding regulations remain in effect.

Comment letter on USCIS Tip Form. ICCR's members have profound concerns about the Department of Homeland Security (DHS) / US Citizenship and Immigration Services (USCIS) proposal to implement a new  "tip form". The implementation of the USCIS Tip Form permits unsubstantiated reporting to USCIS, the agency with jurisdiction over immigration benefits, and creates a high likelihood that bias and bigotry will play a role in reporting. Reported individuals face increased scrutiny, surveillance, and potential loss of benefits without any due process that could enable them to refute allegations of fraud.

Comment letter on proposed changes to the "public charge" rule. A part of federal immigration law for over a hundred years, the “public charge” test is designed to identify people who may depend on the government as their main source of support. On October 10, DHS proposed to change this long-standing policy by excluding anyone who is likely to use certain health care, nutrition or housing programs in the future. If the rule is finalized in its proposed form, this would mark a significant and harmful departure from the current policy. ICCR issued a public statement in response on December 7. It also signed onto this letter comment from consumer and advisory groups on December 10.

Guidance on Corporate Human Rights Due Diligence Related to Immigration Detention and Family Separation. The Investor Alliance for Human Rights - an ICCR project - has developed this white paper for corporations seeking to minimize their exposure to human rights risks regarding the issues of immigrant detention and family separation.

Muslim Travel Ban. On June 27, 2018 ICCR issued a public statement condemning the Trump administration’s travel ban – a policy that transparently discriminates against communities based on religious beliefs and ethnic identities.

Deferred Action for Childhood Arrivals (DACA). The consequences of rescinding DACA without a more permanent replacement would be severe for 800,000 young immigrants and for our national economy.  In a letter sent on November 16th, 2017, investors wrote to Congress in support of a “clean” version of Dream Act that is not tied to other immigration-related proposals. As investors, we are concerned that the failure to pass a “clean” Dream Act will be detrimental to the businesses we invest in, as well as the larger business environment.

The Business Risk of Census 2020. ICCR believes a question on citizenship will undermine the accuracy of 2020 census data, and runs the risk of significantly under-representing immigrant, minority and low-income populations.

Our Partners on Immigration: 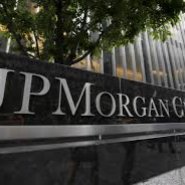 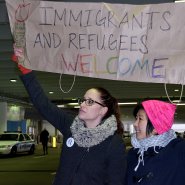 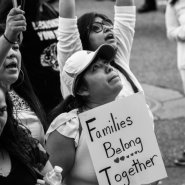 Current companies we are engaging on immigration.
>>