10K: A Form 10-K is an annual report required by the U.S. Securities and Exchange Commission (SEC),that gives a comprehensive summary of a company's performance. Although similarly named, the annual report on Form 10-K is distinct from the often glossy "annual report to shareholders," which a company must send to its shareholders when it holds an annual meeting to elect directors (though some companies combine the annual report and the 10-K into one document). The 10-K includes information such as company history, organizational structure, executive compensation, equity, subsidiaries, and audited financial statements, among other information. ICCR members review the form 10-K for the companies’ risk assessment on issues when preparing to engage companies.

AGM/Annual General Meeting: An annual general meeting (commonly abbreviated as AGM, also known as the annual meeting) is a meeting that official bodies, and associations involving the general public (including companies with shareholders), are often required by law (or the constitution, charter, by-laws etc. governing the body) to hold. An AGM is held every year to elect the board of directors and inform their members of previous and future activities. It is an opportunity for the shareholders and partners to receive copies of the company's accounts as well as reviewing fiscal information for the past year and asking any questions regarding the directions the business will take in the future (Wikipedia).

ICCR holds its Annual General Meeting in June to discuss the organization’s progress on issues we engage companies on, and to conduct elections and other official business.

Asks (of a company): Refers to the requests ICCR members make of companies either in a resolution or dialogue.  In engagements it is imperative to make “ask” clear so that the company understands what actions they are expected to take, and ICCR members can track the progress of the company towards fulfilling the request.

CDP/Carbon Disclosure Project: CDP is an international, not-for-profit organization providing the only global system for companies and cities to measure, disclose, manage and share vital environmental information. We work with market forces to motivate companies to disclose their impacts on the environment and natural resources and take action to reduce them. CDP now holds the largest collection globally of primary climate change, water and forest-risk information and puts these insights at the heart of strategic business, investment and policy decisions (CDP website). ICCR members request companies the engage with to disclose their carbon, water and forest risk via CDP questionnaires.

Co-file: When shareholders file a resolution they will sometimes be joined by others who support the resolution. The group or individual who submits the resolution is the lead filer, the others (co-filers) submit a letter asking to be added to the list of filers (REC Glossary).

Community investment: Any kind of investment that directly benefits the community. Different from philanthropy because the investor hopes to profit from the investment, and because control over the use of invested capital rests in the hands of community institutions rather than the investor (REC Glossary).

Dialogue/Corporate Dialogue: A process of engagement where shareholders, individuals, NGOs and other groups outside of a corporation attempt to change the way the firm behaves by talking to individuals within the corporation (Nadira REC Glossary) .

Corporate Engagement:  Any time a shareholder writes a letter, calls, files a shareholder resolution/proposal or engages in dialogue with a company to discuss an issue.

CRI/Coalition for Responsible Investment: A regional coalition of faith-based religious communities who work together  and utilize their power as shareholders to hold corporations accountable to social and environmental concerns.

Corporate social responsibility/CSR. Corporate social responsibility (CSR, also called corporate conscience, corporate citizenship, social performance, or sustainable responsible business/ Responsible Business)[1] is a form of corporate self-regulation integrated into a business model. CSR policy functions as a built-in, self-regulating mechanism whereby a business monitors and ensures its active compliance with the spirit of the law, ethical standards, and international norms. In some models, a firm's implementation of CSR goes beyond compliance and engages in "actions that appear to further some social good, beyond the interests of the firm and that which is required by law."[2][3] CSR is a process with the aim to embrace responsibility for the company's actions and encourage a positive impact through its activities on the environment, consumers, employees, communities, stakeholders and all other members of the public sphere who may also be considered as stakeholders (Wikipedia)

Emerging Markets: nations with social or business activity in the process of rapid growth and industrialization. The economies of China and India are considered to be the largest. The seven largest emerging and developing economies by either nominal or inflation-adjusted GDP are the BRIC countries (Brazil, Russia, India and China), as well as MIKT (Mexico, Indonesia, South-Korea and Turkey) (Wikipedia)

FPIC/Free Prior and Informed Consent: is the principle that a community has the right to give or withhold its consent to proposed projects that may affect the lands they customarily own, occupy or otherwise use. FPIC is now a key principle in international law and jurisprudence related to indigenous peoples.  See: Declaration of the Rights of Indigenous Peoples (UNDRIP).

Investment Portfolio: The collection of stocks held by an investor.

KPI/Key Performance Indicator: Quantifiable measurements that an investor, a company or industry uses to gauge or compare performance in terms of meeting strategic and operational goals.

Lead (Primary) Filer: ICCR member or investor who lead an action are called the ‘lead’ or ‘primary’ filer.  Lead filers organize the resolution or dialogue, and invite others to co-file, co-lead engagements with them.

Members Area: A benefit of membership in ICCR, this password-protected, collaborative website is used by ICCR members and staff to share research, news and strategies.

Proxy: A proposal submitted by stockholders for a vote at the company’s annual meeting. Also known as shareholder proposal, proxy resolution, or just proxy. A proxy statement is a statement required of a firm when soliciting shareholder votes. This statement is filed in advance of the annual meeting. The firm needs to file a proxy statement, otherwise known as a Form DEF 14A (Definitive Proxy Statement), with the U.S. Securities and Exchange Commission. This statement is useful in assessing how management is paid and potential conflict-of-interest issues with auditors (Wikipedia/REC Glossary)

Proxy voting: a form of voting whereby some members of a decision-making body may delegate their voting power to other members of the same body to vote in their absence. A person so designated is called a "proxy"

Publicly Traded Company: A public company, publicly traded company, publicly held company, or public limited company (in the United Kingdom) is a limited liability company that offers its securities (stock/shares, bonds/loans, etc.) for sale to the general public, typically through a stock exchange, or through market makers operating in over the counter markets (Wikipedia)

Shareholder: An individual or institution that owns stock in a company.

ICCR Shareholder Actions Database: ICCR’s database contains the complete texts and voting outcomes of more than 2,000 shareholder resolutions from 1992 until the present. Institutional shareholder sign up via the database to collaborate around specific corporate engagements each year.

Shareholder Advocacy aka Shareholder Activism: The act of using an equity stake in a corporation to put public pressure on its management. The goals range from financial (increase of shareholder value through changes in corporate policy, financing structure, cost cutting, etc.) to non-financial (disinvestment from particular countries, adoption of environmentally friendly policies) (REC Glossary).

Supply Chain:  A supply chain is a system of organizations, people, activities, information, and resources involved in moving a product or service from supplier to customer. Supply chain activities transform natural resources, raw materials, and components into a finished product that is delivered to the end customer. In sophisticated supply chain systems, used products may re-enter the supply chain at any point where residual value is recyclable. Supply chains link value chains.

Our Theory of Change 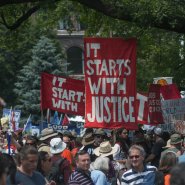