The filing of shareholder proposals for inclusion on annual corporate proxy statements is an important tool investors can employ to catalyze change on environmental, social and governance (ESG) concerns.

Our members filed 281 resolutions for the 2020 proxy season on a range of topics, from human rights & worker rights, to climate change and high drug prices. Of particular note was this season's surge in human rights-related asks; check out our 2020 Proxy Resolutions and Voting Guide to learn more about these resolutions.

Below is a brief recap of the 2020 season and the outcomes of our members' proposals. Be sure to download the 2020 edition of Catalyzing Corporate Change for a deep dive into this season's trends and outcomes.

AGMs Go Virtual: COVID-19 forced most companies to abandon in-person annual shareholder meetings and switch to a virtual format. To help ensure investors’ ability to participate in the Q&A sessions, ICCR launched the #AskTheCEO video campaign, capturing their questions for the record.

A Focus on Workers: At 52 proposals, our members’ human- and worker-rights-focused resolutions emerged as the dominant issue this year, just nudging past proposals related to climate change and lobbying.

All Eyes on Amazon: ICCR members filed nine proposals at Amazon, more than they sent to any other company this year. The proposals resulted in two agreements: one on human trafficking (Adrian Dominican Sisters), and another on the risks of third-party sellers (Mercy). In addition, there were five votes exceeding 30%.

Covid-19 and Racial Justice Re-Shape ESG Investing: ICCR members are taking action on several fronts to ensure that as businesses respond to the pandemic, they do so in a way that safeguards all their stakeholders, and foremost, their workers.

If a company reaches an agreement with investors to implement the main requests of their proposal – such as issuing a report or amending a policy – the investors may choose to voluntarily 'withdraw' their resolution. Every year ICCR members negotiate dozens of these successful agreements. As of July 30, ICCR members successfully negotiated 114 substantive agreements (forty percent of resolutions we filed).

The majority of these agreements concerned issues of workplace diversity and inclusion (27), climate change (26) and human rights (19).

In addition our members reached eight agreements on health, eight on lobbying & political contributions, and seven on corporate governance. 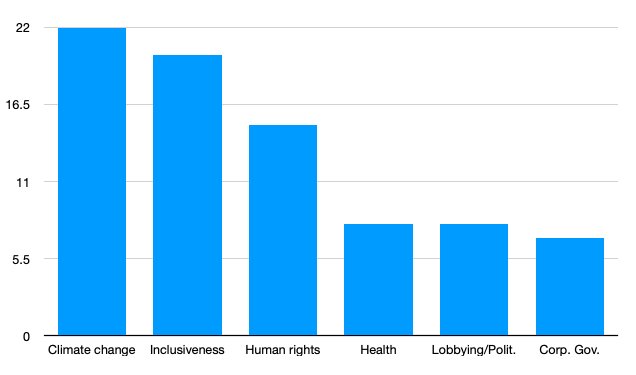 Of the 112 proposals that went to a vote, 10 achieved majority votes, consistent with 2019 performance. A full 65 proposals, or 58%, achieved votes of 25% or greater.  Majority votes include:

In addition, 71% of independent shareholders (15.2% including JBS SA-controlled shares) voted for the Pilgrim's Pride water pollution resolution. The two highest votes so far this seasons - at Genuine Parts and Fastenal - were for resolutions addressing workplace inclusiveness. 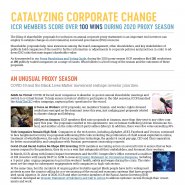