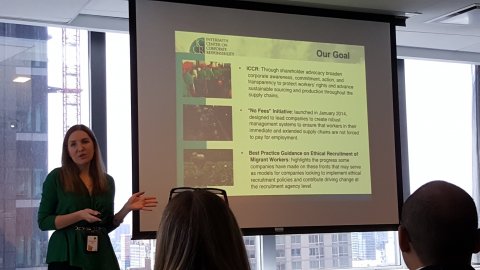 Among sustainability issues that have come to light in recent years, recruitment of migrant workers has rapidly gained attention as a global phenomenon frequently synonymous with egregious violations of human rights such as forced labour and human trafficking.

Few products today are made without the use of migrants recruited through the concealed network of labour brokers who require workers to pay a variety of fees to be placed on a given job. Industries at high-risk of such practices include agriculture, apparel, automotive, construction, consumer goods, electronics, food & beverage and travel & hospitality and their extended supply chains.

Many companies are still not aware of the human rights risks posed by unregulated recruitment. The aggregated fees per worker are at times so high that individuals essentially must work for free for many months or even years trying to repay their debts. Recruitment fees are creating debt bondage that in the 21st century gives new dimension to the term “modern day slavery”

Three years ago, ICCR, an interfaith shareholder coalition uniting over 300 institutional investors with over $200 billion in assets under management, launched the “No Fees” Initiative to tackle the problem of unethical recruitment practices. Initially, “No Fees” started with a “3-pillar” framework advocating for companies to adopt policies that:

Many companies prohibit the use of forced labour in their direct operations and at the immediate supplier level through their codes of conduct, guidance documents and auditing tools. However, the majority of companies ICCR surveyed do not cover the specific pillars of the “No Fees” Initiative. Without clear and transparent policies on recruitment it is hard for investors, consumers and other stakeholders to know if a company is taking concrete and active steps to combat emerging forms of forced labour.

During a research trip to Thailand in 2014, “No Fees” tested the “3-pillar” approach in, at that time, one of the world’s most challenging markets. Through ICCR’s collaboration with the Issara Institute, we interviewed several groups of migrant workers and labour brokers working with companies supplying food and beverage industries as well as local companies who suffered from reputational issues as a result of poorly managed recruitment processes in their supply chains. While our “3-pillar” framework targeted key forced labour and human trafficking preventive measures, there were still areas that needed focus, including illegal deduction from paychecks and possibilities for direct recruitment.

ICCR’s 2015 report, Recruited Into Slavery highlighted these findings. However implementation of ethical recruitment policies still remained a largely concealed process - calling for a follow up research and a push for a greater disclosure even among the leading companies on the topic.

Our new report - Best Practice Guidance on Ethical Recruitment of Migrant Workers - brings together industry specific expertise and cross industry policy approaches to improving recruitment processes. Given ICCR’s unique position engaging various sectors through shareholder advocacy, the “No Fees” Initiative served as a collaborative platform for the agriculture, apparel, electronics and food and beverage sectors. The result is a unique guidance document of emerging practices to help companies and investors understand what “good” looks like and how to effectively implement ethical recruitment policies.

The report features eight case studies (four buyers and four suppliers) using methodologies that range from shadow audits to company surveys and auditor feedback. The guidance identifies and highlights a progression from the initial “3-pillar” framework towards full disclosure and leadership on an industry level that participating companies aspired to in the study. The report touches on issues such as implementing direct recruitment models, gaining visibility and auditing recruitment agencies. It also stress the need to secure support of a company’s top management to prioritise ethical recruitment and anti-forced labour provisions while selecting and continuously working with suppliers to build closer and more transparent relationships.

We are still in the early days of assessing progress in ethical recruitment policy implementation and building a data base of good practices. To date, key learnings for ICCR include the importance of understanding the different recruitment fees which can only be evaluated if a company works closely with suppliers and includes recruitment agents in the scope of its third-party audits. When it comes to implementation of fee reimbursement policies, companies of any size or level of visibility must exercise their leverage with suppliers. Leverage in this context directly correlates with a company’s share of production at specific supplier facilities as well as current industry standards enforced by other buyers working with the same supplier. Without these two factors, implementation becomes nearly impossible.

To make further progress, industries and multi-sector initiatives must collaborate through efforts like the Leadership Group for Responsible Recruitment, The Consumer Goods Forum’s Forced Labour Initiative and the Electronics Industry Citizenship Coalition’s Responsible Labour Sourcing Initiative. To end unethical recruitment practices, there needs to be greater convergence of standards and approaches. That starts with transforming recruitment from a “worker-pays” to an “employer-pays” system as well as changing expectations and practices for buyers and suppliers throughout all supply chains.