Clawback provisions can help set a “tone at the top” that emphasizes compliance and ensure that employees do not benefit financially from conduct that is harmful to the company and to shareholders.  The company should adopt a clawback policy to (a) recover incentive compensation in the event of a violation of a company policy relating to non-compliance with a law or regulation that causes significant financial or reputational harm to a company, including supervisory failures, and (b) require disclosure to shareholders in the proxy statement about such recoveries.

By way of example, the boards of Cardinal Health and McKesson have adopted a robust clawback provision that includes disclosure of the use of a clawback.  In a recent decision, the SEC decided in favor of IOA investors and against AmerisourceBergen seeking to exclude this proposal from its 2018 proxy ballot.  Johnson & Johnson has no actioned a 2019 resolution calling for clawback disclosure.

BlackRock recently announced its support of shareholder resolutions calling for the clawback of senior executive pay where “behavior caused direct financial harm to shareholders, reputational risk to the company or resulted in a criminal investigation, even if such actions did not ultimately result in a material restatement of past results.  This includes, but is not limited to, settlement agreements arising from such behavior and paid for directly by the company.”[1] 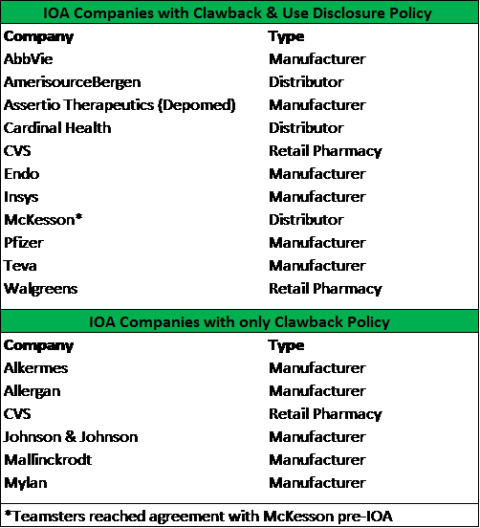