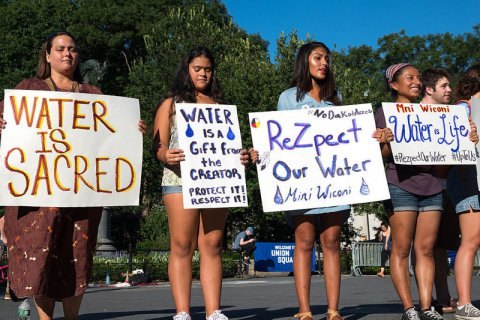 The Dakota Access Pipeline Project (DAPL) is a $3.78 billion, 1,172 mile long extension that will connect the Bakken fields in North Dakota with existing pipelines in Illinois to transport up to 570,000 barrels a day of crude to refineries and markets in the Gulf and on the East Coast. The Army Corps of Engineers approved the project in July with a “fast-track” option, allowing it to run under the Missouri river and through tribal territory belonging to the Standing Rock Sioux  near Cannon Ball, North Dakota. The tribe says the pipeline disturbs sacred sites, infringes on past treaty promises and tribal sovereignty, and is a significant danger to their water supply since it passes underneath the Missouri River — the main source of water for the reservation.

Native Americans from tribes all over the country are protesting the construction of the DAPL and investors who have advocated for corporate respect for human rights including free prior and informed consent for indigenous people as well as protection of the human right to water for local communities, are using their voices as shareholders to stand with the Sioux. Led by Boston Common Asset Management, investors are asking the the main companies involved in the project either directly or indirectly via lending to meet with tribal representatives and consider the impacts the pipeline will have on these communities .

Investors have filed a shareholder proposal with Marathon Petroleum, asking it to describe its due-diligence processes for managing environmental and Indigenous rights risks. They have also filed with Phillips Petroleum, asking the company to include assessments of risks to Indigenous peoples during asset acquisitions. 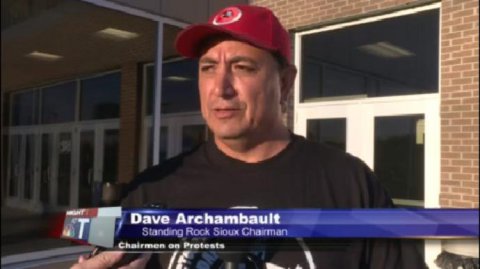 According to Calvert's statement:

"The Standing Rock Sioux Tribe opposes the Energy Transfer Partner’sv  Dakota Access Pipeline as it fears contamination of its only water source, the Missouri River.  While pipelines transport oil and gas in a safer fashion than trucks or railways, there are significant site-specific environmental and safety risks for pipelines that must be addressed. Between 2010 and 2015, there were over 3,300 incidents of crude oil and liquefied natural oil leaks or ruptures on US pipelines.vi  Within the pipeline industry, some companies manage these risks more effectively than others, and Energy Transfer Partners has an especially poor record.  According to the National Lawyers Guild, the company and its affiliates “have a long history of violations of environmental laws, including pending lawsuits by the states of New Jersey, Vermont, Pennsylvania and the Commonwealth of Puerto Rico and the City of Breau Bridge, Louisiana over MTBE contamination of groundwater, as well as citations for releases of hazardous materials from its pipelines and facilities in Ohio, Oklahoma, Louisiana, Missouri, Texas, Pennsylvania and Hawaii." 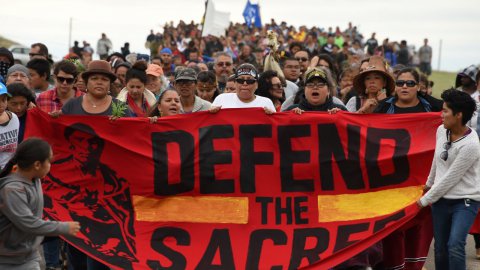 And from Boston Common's statement:

"We are troubled by the manner in which Energy Transfer Partners, L.P. has approached the concerns of the Standing Rock Sioux Tribe in the construction of the Dakota Access Pipeline (DAP). The pipeline threatens to destroy sacred places and burial grounds and contaminate drinking water for the Tribe. Dakota Access Pipeline, LLC a subsidiary of Energy Transfer Partners (ETP), proposed a pipeline in late 2014 to transport crude oil from the oil fields of North Dakota to Illinois, which environmental activists are calling a sequel to the Keystone XL pipeline. DAP received permission from the Army Corps of Engineers to proceed with the project but the Tribe argues that the federal agency has ignored their concerns about the pipeline plans and route for two years. Further, we are concerned that the consultation by DAP and government agencies with the Standing Rock Sioux Tribe does not appear to have been in accordance with the UN Declaration on the Rights of Indigenous Peoples that the U.S. endorsed in December 2010.

Boston Common provided this recent update of its efforts to educate investors about the DAPL and the concerns of the Standing Rock Sioux:

Over the past two months, Boston Common, in conjunction with First Peoples Worldwide, has led efforts to educate investors about the Dakota Access Pipeline and the concerns of the Standing Rock Sioux Tribe. Steven Heim, Director of ESG Research at Boston Common, organized meetings or conference calls between the Chairman of the Standing Rock Sioux Tribe or other tribal representatives, and investors, such as the Interfaith Center on Corporate Responsibility, the Investors and Indigenous Peoples Working Group, major pension funds, and Wall Street analysts. We have also reached out to key lenders to the pipeline to convey the Tribe’s views and flag our concerns regarding the risks involved.

From recent meetings with the Chairman of the Standing Rock Sioux Tribe, Dave Archambault II, we understand the core issues for the Tribe:  protecting water from oil contamination and protecting sites that are sacred to the Tribe. As investors, we are also concerned by the grave risks from an oil pipeline spill, particularly at a water crossing. Precedents for major oil pipeline accidents include the oil spills that damaged the Yellowstone River in Montana (2011) and Kalamazoo River in Michigan (2010). Therefore, we support the Tribe’s call for a full environmental impact statement before an easement is granted.

If you are interested in learning more about the issue or joining the investor engagement, please contact Steven Heim at Boston Common Asset Management, [email protected].

A blog by Rebecca Adamson
>>

Who is Funding the DAPL?

Obama's Legacy Rests on Whether He Stops Dakota Access Pipeline