If you are an investor, we invite you to read the proposals listed in our 2022 Proxy Resolutions and Voting Guide, and vote your proxies in support. Un-voted proxies are considered abstentions and are counted as votes for management, so we strongly urge you to practice active ownership by voting your proxies every year.

Download the Guide and listen to the launch webinar here

Increasing Support for our Members’ Proposals

Last year saw a record number of ICCR-member proposals -- 23 -- winning majority support, seven of which won votes in excess of 90 percent.  In addition, ICCR member proposals winning 30 percent or greater is rising. Last year half of all member resolutions going to a vote (81 resolutions) reached or surpassed the 30 percent threshold, a clear increase over 2020 which saw 60, and over 2019, which saw 52. Average votes across all proposals in 2021 was 32%, also up from the previous year.

This growing support is a clear indication that our members’ concerns about environmental and social impacts and sound corporate governance are becoming more broadly shared by mainstream investors who increasingly view the risks that ICCR members raise as material.

A Note About the Sharp Increase in 2022 Filings 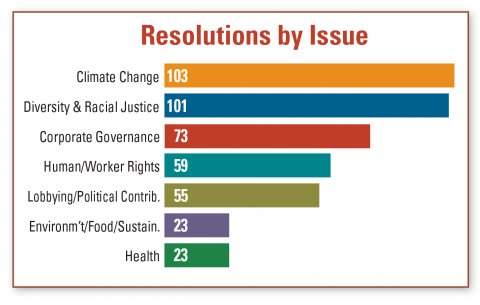 Despite recent, restrictive changes to rule 14a-8, to date our members have filed a record-breaking 436 resolutions in 2022 compared with 244 at this time last year. That number is expected to grow as additional resolutions are filed through the spring. While many of our members did increase the number of proposals they filed in 2022, some of this increase is also due to new members joining our ranks.

Resolutions addressing the climate crisis and racial justice and diversity, equity and inclusion (DEI) were the most numerous, with 103 and 100 proposals respectively. Climate-focused proposals are up 88% versus a year ago, while racial justice/DEI proposals increased 60%. Filings calling for corporations to align their lobbying activities with the goals of the Paris climate accord more than doubled this year. Another group of climate-focused proposals pressed top U.S. banks and insurers to reduce their fossil fuel financing and underwriting.

This growth of filings focused on racial justice and DEI is largely due to a group of 32 resolutions calling for companies to conduct racial equity (REAs) and civil rights audits (CRAs). Last year SOC Investment Group and the Service Employees International Union (SEIU) filed an initial set of proposals calling for REAs and CRAs assessing the impacts of company products, services, and practices on non-white stakeholders and communities of color. This year, the number of proposals in this group more than tripled.

An Increased Focus on the Rights of Workers

As BlackRock's Larry Fink wrote in his 2022 letter to CEOs, "No relationship has been changed more by the pandemic than the one between employers and employees." This year there is a large group of proposals focused on worker rights, tackling a range of issues including the provision of paid sick leave and a living wage, to employee misclassification, competitive employment standards, employee turnover, freedom of association and risks from the use of temporary workers. Several called for inclusion of hourly employee voices on boards of directors. 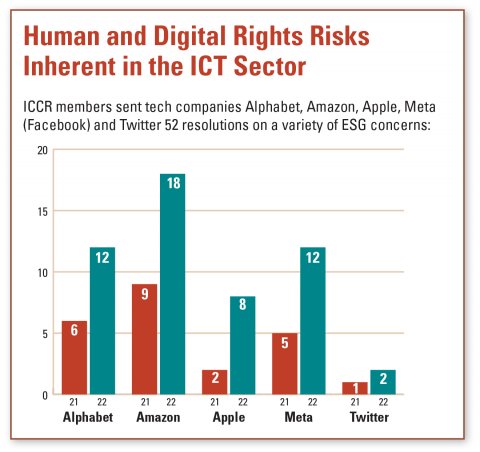 Given their unparalleled influence and concentrated control of communications platforms, tech companies can cause and be directly linked to a host of human rights and digital rights harms. Harms range from the use of surveillance technology, to breaches in data privacy, and the spreading of misinformation and discrimination harms as a result of algorithms used to collect data, manage content, and target users with advertising. Together with the Investor Alliance for Human Rights, ICCR members sharply ramped up their engagements with the tech sector, filing a total of 53 proposals at Meta (Facebook), Alphabet, Amazon, and Twitter, nearly double the amount filed in 2021.

While many of this year’s lobbying and political spending proposals followed a familiar format with calls for detailed disclosure and transparency on corporate lobbying and spending, several new resolutions focused more on driving alignment between a company’s political activities and its stated core values and public commitments on key issues. One area of deep investor concern is the deleterious impacts of corporate political contributions on the health of our democracy, particularly in the channeling of corporate funds to politicians and political organizations championing voter suppression efforts at the state level.

Withdrawals for Agreement and SEC Challenges

Every year ICCR members negotiate over one hundred successful agreements with companies directly related to their resolutions. 2022 looks to be another strong year for ICCR members with 46 agreements for meaningful change already negotiated at the time of publishing. Ten of these were achieved for DEI/RJ resolutions and seven for climate-focused resolutions.  The number of withdrawals is expected to grow in the coming months.

82 proposals have so far been challenged by companies and are currently being adjudicated by the SEC. Our members win the majority of these contests each year, and lost only 27 last year.

The 2022 Diversity and Racial Justice Proposals