The Interfaith Center on Corporate Responsibility is both disturbed and disheartened by the Supreme Court’s decision to uphold the Trump administration’s travel ban – a policy that transparently discriminates against communities based on religious beliefs and ethnic identities. Yesterday’s endorsement by America’s highest court of an executive order designed to prohibit citizens from Muslim nations from entering our country should be offensive to any American committed to our nation’s ideals of tolerance, inclusiveness and justice.  Like the unconscionable separation of children from their parents at the Southern border, the Muslim Ban threatens to tear apart families and communities under the false guise of threatened national security. 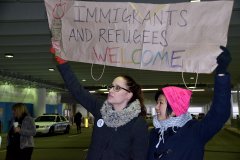 As an interfaith coalition of religious and values-based investors, ICCR has promoted respect for human rights at the world’s most powerful corporations because we know these principles benefit not only our society, but ensure an inclusive and prosperous global economy. We will continue to press for legislative action that defends families and communities including an end to the travel ban.

We call upon the business and investment communities to reject the thinly veiled bigotry and xenophobia that the travel ban evokes and to stand with the Muslim communities that may be irreparably damaged by this egregious decision. In doing so, they will be honoring foundational American principles of ethnic and religious tolerance, and taking a much-needed moral stand for justice.