ICCR members and the Families Belong Together Coalition began engaging U.S. banks in 2017 to highlight the human rights risks of lending to the private prison industry, particularly given an increase in government contracts to detain immigrants as part of the current administration’s controversial immigration policies, including family separation.

In all, ICCR members are engaging a total of thirteen banks on their potential contributions to inmate deaths, poor medical care, allegations of detainee physical and sexual abuse, and violence as a result of their financing of private prisons. All of the existing banking partners of private prison leader GEO Group --  including JPMorgan Chase, Wells Fargo, Bank of America, SunTrust, BNP Paribas, Fifth Third Bancorp, Barclays, and PNC -- have now officially committed to ending ties with the private prison and immigrant detention industry. 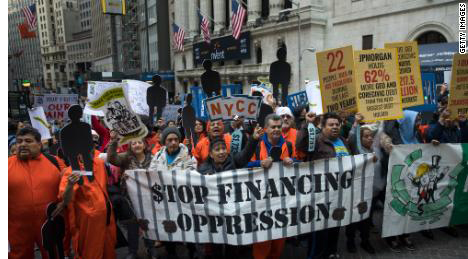 The stock price for GEO is now near a historic low, and credit rating agency Fitch cited uncertainty over the possibility that additional banks could sever ties with the sector as the rationale for its downgrade of the company from stable to negative.

Forbes: GEO Group Running Out of Banks as 100% of Known Banking Partners Say "No" to the Private Prison Sector