Demarest, NJ: Every day, choices made in supermarkets and restaurants have a critical impact on the lives of people around the globe. With the help of a human rights expert and two students from the Academy of the Holy Angels, the School Sisters of Notre Dame have produced a video to increase awareness of slavery and human trafficking in the fishing industry supply chain. 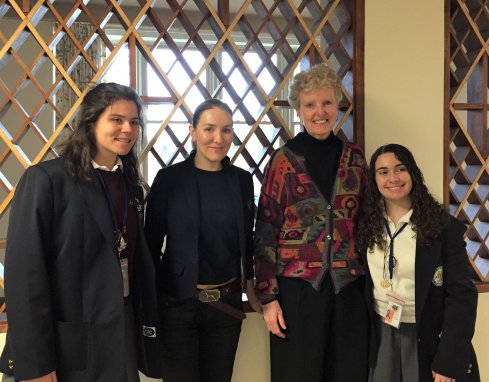 This month, AHA senior Danielle Sanchez and junior Katelyn Spinks traveled to Wilton, Connecticut, where they interviewed Valentina Gurney from the Interfaith Center for Corporate Responsibility. They were joined on camera by Sister Arlene Flaherty, OP, who directs the Justice, Peace, and Integrity of Creation initiative for the School Sisters’ Atlantic Midwest Province.

Sister Arlene decided to create this video as an educational tool for the SSND community and its schools, including AHA.

During a conversation with AHA Director of Mission and Ministry Joan Connelly, Sr. Arlene asked Connelly to recommend two students who could appear in the video to help make the message accessible to other teens. Connelly spoke with the Holy Angels faculty, who recommended Spinks and Sanchez.

Spinks was selected for her work as vice president of Restore, a club that supports victims of human trafficking.

“I feel that because I have the ability to speak out and inform people on issues, it is a part of my responsibility to try and help,” Spinks stated.

Sanchez was also chosen for demonstrating a strong interest in human trafficking. Earlier this year, Sanchez produced a short video of AHA students and staff stating their opposition to human trafficking in preparation of the March 14th Awareness Day at the Academy. That clip was later sent to Congress. 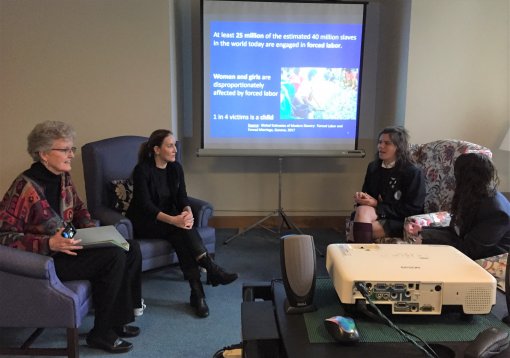 Sanchez said she became interested in human trafficking through her international studies classes. Her experience at the interview in Wilton further enhanced her understanding of this issue.

“I did not know that the food supply chain, particularly the fish industry, was filled with so much labor trafficking and slavery,” she noted.

The link between human trafficking and the food we eat was also a revelation for Spinks. She stated, “I knew of sweatshops, but I never imagined that the food I ate could be involved with forced labor.”

The interview with Gurney highlighted the fact that there are some unscrupulous brokers within the fishing supply chain who charge exorbitant fees to find work for people. Workers become indebted to the brokers, remaining on the job for extremely long periods of time as they attempt to repay the fees. Those involved in the shrimp and tuna industries, in particular, have been featured in recent news articles.

The people Gurney contacted about their experiences have to remain anonymous for their personal safety. The ICCR representative shared some of those stories during the taping.

“Those personal accounts, along with all my prior knowledge made me realize that I need to take my food choices more seriously. I have stopped eating shrimp entirely, and I don't think I'll eat seafood in a restaurant again,” Sanchez said. “I'm going to try and keep the discussion going for as long as possible, and try to educate as many people as possible, both in school and out of school.”

Spinks noted that, in addition to learning about many shocking facts and statistics during her talk with Gurney, she in now aware of how people become ensnared in human trafficking schemes. 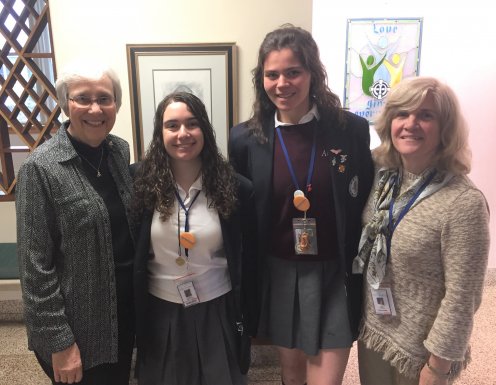 “More importantly, I learned how I can help,” Spinks said. “I will be more aware of what I buy in the grocery stores. I can do research on the brands I frequently buy to make sure that they are processed and made morally.”

She added, “I am very happy that this video will be shared because I feel like not a lot of people know about this issue and the first step to getting the victims the help they need is to create awareness.”
Several SSNDs were present at the taping of the video, including Sister Ethel Howley, the former SSND non-governmental organization representative to the United Nations. S. John Vianney, who is in charge of "the house" at Villa Notre Dame, was also in attendance.

Founded by the School Sisters of Notre Dame in 1879, the Academy of the Holy Angels is the oldest private girls’ school in Bergen County. While AHA is steeped in Catholic tradition, this prestigious high school serves young women from a broad spectrum of cultural and religious backgrounds. Over time, thousands of women have passed through AHA’s portals. Many go on to study at some of the nation’s best universities, earning high-ranking positions in medicine, government, law, education, public service, business, arts, and athletics. The Academy’s current leaders continue to further the SSND mission to provide each student with the tools she needs to reach the fullness of her potential—spiritually, intellectually, socially, and physically, by offering a first-rate education in a nurturing environment where equal importance is placed on academic excellence, character development, moral integrity, and service to others.