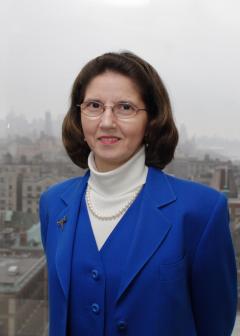 Victoria Moilan has been with ICCR since 1995, and has worked in office administration for much of her career. She administers ICCR’s computer network,  oversees the logistical operations of the office  and coordinates ICCR's Annual General Meeting. Her job with ICCR was her first venture into non-profit work.  What drew her was ICCR's commitment to stewardship of the earth's resources and the diversity of  issues that ICCR took on -- such as  energy & environmental concerns, human rights, and tobacco advertising targeting minors.  “The issues change, but ICCR's core values are constant,"  Victoria said.  A native of New York City,  Victoria majored in English at Hunter College.   She writes poetry, fiction and is a member of the International Women’s Writing Guild.