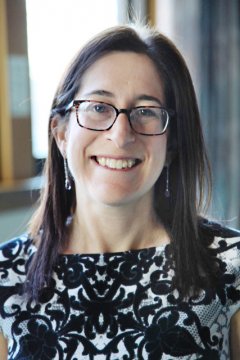 Rabbi Rachel Kahn-Troster (she/her) is ICCR's Executive Vice President. She serves as the primary internal manager for the organization, and partners with the CEO in developing and implementing the organization's overall vision and strategy.

Before joining ICCR, Rachel spent nearly fourteen years at T'ruah: The Rabbinical Call for Human Rights, most recently as Deputy Director. At T'ruah, she was the lead strategist on T’ruah’s human rights campaigns and headed the organizing and training of more than 2,000 rabbis and cantors. In late March of 2021, she began as Executive Vice President at ICCR, working with faith and values based investors to catalyze their assets for social change.

Ordained in 2008 from the Jewish Theological Seminary, where she was a student activist and leader, she is a noted speaker and writer on Judaism and human rights. She first came to T’ruah in 2007 to organize against U.S-sponsored torture in the war on terror. Since then, she has initiated campaigns against human trafficking and forced labor, to end solitary confinement, to fight against mass incarceration, and for human rights in the occupied Palestinian territories. Rachel is the original #tomatorabbi, spearheading T’ruah’s critical partnership with the Coalition of Immokalee Workers in Florida, and leads Jewish community in worker-led campaigns for corporate accountability. Rabbi Kahn-Troster serves on the board of the Alliance for Fair Food, and is an Adjunct Lecturer at the Jewish Theological Seminary.  She lives in Teaneck, New Jersey, with her husband, Dr. Paul Pelavin, and their daughters Liora and Aliza.