With 59 proposals, human rights and worker rights-related filings were the fourth most active category this year up from 37 proposals in 2021. 2022 HR&WR proposals also addressed digital rights with tech companies, human rights due diligence, human rights risks in conflict-affected areas, gun safety, child labor and forced labor – including in the Uyghur autonomous region in Xinjiang, China. 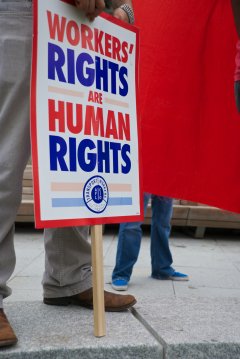 A group of 2022 resolutions centered on the human rights risks associated with big tech. Apple, Alphabet, Amazon, Meta (Facebook) and Twitter all received resolutions.  In addition to returning concerns such as misinformation, facial recognition, and online child sexual exploitation materials, new tech company resolutions cited data operations in human rights hotspots, and called for disclosures regarding how algorithmic systems are used to target and deliver ads.

Other new human rights resolutions this year include the financialization of housing (affordable housing), and the risks of the proliferation of ghost guns.

As BlackRock's Larry Fink wrote in his 2022 letter to CEOs, "No relationship has been changed more by the pandemic than the one between employers and employees." Even as COVID-19 remains a serious public health threat, government protections meant to safeguard essential workers are already expiring. The "great resignation" and an uptick in unionization efforts illustrate workers' growing frustration.

Consequently, this year there is a significant cluster of resolutions focused on worker rights issues, ranging from paid sick leave to employee misclassification, competitive employment standards, employee turnover, freedom of association, low wages and racial equity, inclusion of hourly employee voices on boards of directors, and risks from use of temporary workers. 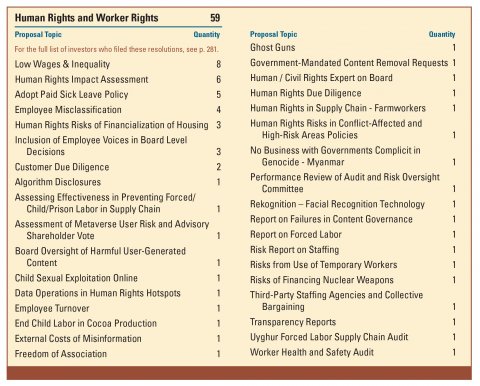 Paid Sick Leave
More than 26 million U.S. workers have no access to paid sick days, and millions more cannot earn and use paid sick time to care for a sick child or family member, leaving them with an impossible choice when they are sick: stay home and risk their economic stability or go to work and risk their/the public’s health.

Arguing that paid sick leave is a baseline benefit that should be available to all employees, a group of investors coordinated by ICCR has sent a letter to over 40 companies and filed shareholder proposals at CVS, Kroger, Target, and TJX.

The resolutions asked the four companies to adopt and publicly disclose a policy that all employees, part- and full-time, accrue some amount of PSL that can be used after working for a reasonable probationary period. This policy should not expire after a set time or depend upon the existence of a global pandemic.

Living Wage
The U.S. federal minimum wage for tipped workers is just $2.13 an hour. Consequently, millions of service sector workers live below the poverty line. Investors this year have filed a number of resolutions addressing employment standards and a living wage.

Working with One Fair Wage, in 2021 ICCR launched a campaign to end subminimum wages in the service sector, filing resolutions with restaurant chains Denny’s and Dine Brands, asking them to report on the feasibility of increasing tipped workers' starting wage to a full minimum wage, per state and federal levels, with tips on top.

Two resolutions filed by ICCR members at Marriott and Tractor Supply asked the companies to report on the costs of low wages and inequality and the risks that prioritizing financial performance over economic and social costs pose for diversified shareholders.

Employee Misclassification
The misclassification of workers as self-employed “independent contractors” when a company controls the manner and means of work and sets hours and wages frequently leads to worker rights violations including wage theft. All employees are legally entitled to a minimum wage, overtime pay, and other benefits which worker misclassification may disallow.  Worker misclassification is a problem in several industries, particularly in trucking, and for gig economy companies i.e Uber and Lyft.

Investors filed resolutions with Best Buy, Lowes, TJX and Urban Outfitters calling for reports on the financial, reputational, and human rights risks resulting from the use in the companies’ supply chains and distribution networks of companies that misclassify employees as independent contractors.

Risks from Use of Temporary Workers
A series of strikes by unionized workers in the U.S. last fall led to a number of companies turning to nonunion salaried staff to fill gaps, resulting in a number of prominent worker health and safety accidents, including at a John Deere facility. ExxonMobil also used temporary replacement workers during a May lockout at a Texas refinery.

Investors called on Exxon to issue a report on flaring events and the risk of industrial accidents that may arise from the use of temporary replacement workers.

Freedom of Association
Freedom of association and collective bargaining are fundamental worker rights protected by a number of national and international legal standards. Amazon is facing increasing labor unrest, and has aggressively fought unionization drives in its warehouses across the U.S.. Over the past year, it has purportedly engaged in multiple instances of employee intimidation, retaliation, and surveillance.

Investors called on Amazon to issue a report analyzing how its current human rights policies and practices protect the rightful application of the fundamental rights of freedom of association and collective bargaining.

Human Rights Risks of Financialization of Housing
Across the U.S. and Canada, housing developers have begun purchasing hundreds of thousands of single-family homes for the purposes of renting them at a profit and charging tenants undue rent increases. This financialization of housing is driving a crisis in affordable housing – both rental and owner – across the U.S. and Canada.

Arguing that housing is an essential a basic and essential human right, investors called on 3 Canadian banks – Bank of Montreal, Royal Bank of Canada, and Toronto Dominion, to assess and mitigate the human rights and reputational risks involved in the financialization of housing. 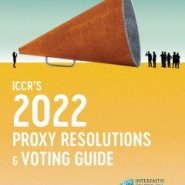