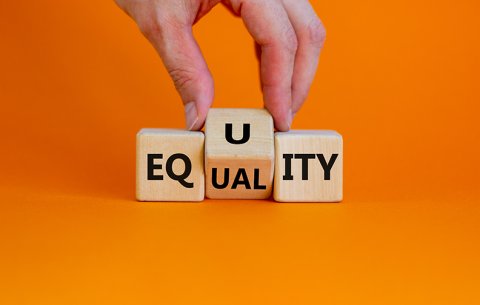 Member filings frequently call for diversity in the board of directors, pay equity, respect for the rights of Indigenous peoples, and reports on workplace sexual harassment and the negative impacts of policies and practices on communities of color.

ICCR-member DEI and racial justice filings rose 60 percent versus last season, continuing a two-year trend. At 101 they are the second-most frequently filed category of resolutions for 2022, just behind climate change.

This growth is largely due to a group of 32 resolutions asking for racial equity (REAs) and civil rights audits (CRAs). There are also several new themes this proxy season including the risks associated with the use of concealment clauses, underwriting police insurance, and negative impacts of facilities adjacent to communities of color, which are discussed below. 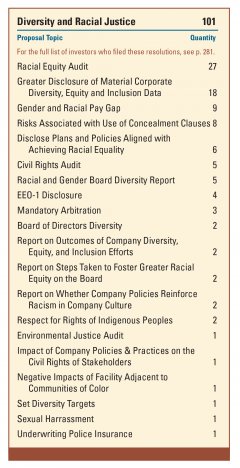 Last year SOC Investment Group and SEIU filed an initial set of proposals calling for companies to conduct racial equity and civil rights audits assessing the impacts of their products, services, and overall corporate practices on non-white stakeholders and communities of color. Momentum for using REAs to combat systemic racism is building; House lawmakers are currently considering legislation that would require banks to carry out racial equity audits every 2 years. In 2022, there were 32 resolutions requesting racial equity and civil rights audits.

This year, the number of proposals calling for REAs and CRAs more than tripled. ICCR members asked companies including Alphabet, Amazon, Apple, Mondelez, Tyson and Wells Fargo to oversee third-party audits analyzing the adverse impact of company policies and practices on the civil rights of their stakeholders, and to provide recommendations for improving their civil rights impacts, incorporating input from racial justice & civil rights groups and employees.

Specific company concerns varied: the Goldman Sachs resolution highlighted the bank’s underwriting of bonds whose proceeds are used to pay police brutality settlements; the Pfizer resolution cited the company’s donations to members of Congress who objected to the certification of the 2020 presidential election; the Wells Fargo resolution emphasized the bank’s support of police foundations that purchase surveillance technology used to monitor communities of color and nonviolent protestors; and the Valero proposal cited pollution in communities of color.

Greater Disclosure of Material Corporate Diversity, Equity and Inclusion Data
Women and non-white employees continue to face significant long-term obstacles as they seek to advance in their careers. White applicants receive an average of 36 percent more callbacks than Black applicants and 24 percent more than Latino applicants. Moreover, for every 100 men who are promoted, only 86 women are.

Given the pervasive pay gap that exists in the U.S. between races and genders in nearly all industries, ICCR members repeated their call for reports on median pay gaps across race and genderat ten companies, including Amazon, Apple, Chipotle and Target.

Disclose Plans and Policies Aligned with Achieving Racial Equality
Following George Floyd’s murder by police officers on May 25, 2020 and subsequent protests calling for racial justice, a number of corporations made public promises to address racism in their operations and products, yet few corporations have taken concrete steps: all-white boards, a lack of diversity in the C-suite, pay inequity, sexism, harassment, and retaliation remain endemic.

Negative Impacts of Facility Adjacent to Communities of Color
Numerous studies have shown that Black, Indigenous, people of color (BIPOC) communities are disproportionately exposed to public health risks, environmental racism, and climate injustice. Kinder Morgan scores in the bottom ten of As You Sow’s Racial Justice Scorecard due to the company’s inaction on racial justice, in particular, toxic emissions from its Dutchtown, St. Louis facility.

Investors asked Kinder Morgan to issue a report quantifying emissions released from its facilities that impact local communities and to describe how it intends to reduce such impacts.