The 2020 corporate annual general meeting season will soon begin, and that means it's time to vote your proxy ballots. So why is this important?
Votes in favor of shareholder resolutions in the double digits are very successful in focusing management and investor attention on issues.
The SEC’s rules recognize this and give small shareholders a voice by requiring a fairly low threshold of support for a proposal to be resubmitted a second and third year. A resolution must get at least 3% of the vote in its first year; 6% of the vote in its second year; and 10% in its third year, andevery year thereafter, to be eligible to remain on the ballot. This gives shareholder advocates the opportunity to mount multi-year education campaigns on proposals before a company.
Want to know more about shareholder resolutions? Take a look at our Guide here. You can also see the full list of the 263 ICCR resolutions that have been filed for the 2020 proxy season.
Several hundred shareholder resolutions will be coming up for a vote by stockholders this year. The following proxy exempt solicitations and proxy memos lay out the arguments for why you should vote in favor:

Restaurant Brands (AGM: 06.10.20): Withholding a vote for the Chair of the Nominating and Corporate Governance Committee 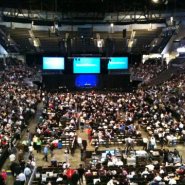