Download a pdf of ICCR's 2019 Proxy Resolutions and Voting Guide.

For the 2019 proxy season, ICCR members  filed 258 resolutions on a range of issues at 170 companies. Resolutions addressing corporate lobbying and political spending were the most popular filing category at 50, a slight increase over last year. The cluster of resolutions directly citing climate change was the next highest, with 45 resolutions. Human rights-related resolutions jumped to 43 from 26. Resolutions seeking greater inclusiveness and diversity were the next most popular category of proposals at 37 filings. 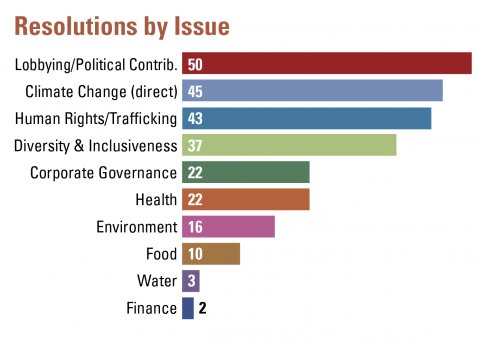 The 2019 proxy season saw a surge in human rights-related proposals, 43 overall, with emerging themes that relate to digital rights and the growing influence of Google, Facebook and Amazon. Still other resolutions examined how companies with government contracts may be linked to human rights abuses as a result of “zero tolerance” U.S. immigration policies

When shareholders file a resolution, companies may reach out to the filers and request a dialogue to discuss aspects of the proposal. If an agreement between both parties is reached that satisfies the main requests of the proposal – such as issuing a report or amending a policy – filers may choose to voluntarily withdraw their resolution which will then will not appear on the company’s proxy statement.

Every year ICCR members negotiate dozens of these successful agreements. 2018 was a particularly strong year for the ICCR coalition, as we negotiated 114 corporate commitments on a range of issues by the year's end. Midway into the 2019 season, our coalition had already achieved 62 successful withdrawals of 2019 resolutions, putting us slightly ahead of where we were at this point in 2018. Withdrawal negotiations will continue over the next few months.

Of those resolutions that went to a vote, a number racked up impressive wins:

Our members also filed on a number of new topics this year, including:

Click here to see a summary of how 2018's resolutions fared.