Compared with this time last year, the number of resolutions filed by ICCR members dipped slightly to 266, while the number of companies receiving resolutions this year is 180, up from 165 in 2017. We expect a few additional filings to take place over the coming months. 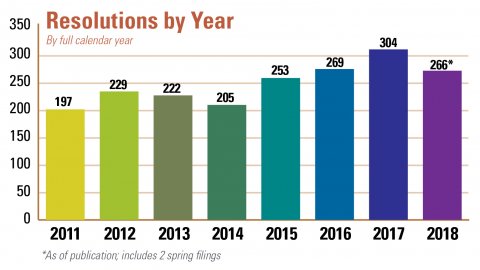 (For those of you who wish to learn more about the process of filing a resolution, check out our Guide to Filing.)

There were a number of new topics this year, including: 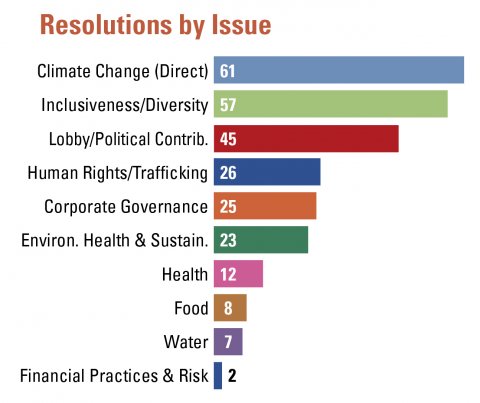 This image shows resolution filings by issue area, arranged from largest to smallest, as measured by volume of filings. For the third consecutive year, the cluster of resolutions citing climate change was the highest, and represented a full third of total filings at 89 resolutions. There was notable growth this year in the number of resolutions seeking greater inclusiveness and diversity which, as a group, became the second most popular category of proposals at 57 filings. The number of resolutions seeking disclosures on lobbying and political spending remained roughly equal to last year, with 45 filings.

When shareholders file a resolution, companies may reach out to the filers and request a dialogue to discuss aspects of the proposal. If an agreement between both parties is reached that satisfies the main requests of the proposal – such as issuing a report or amending a policy – filers may choose to voluntarily withdraw their resolution which will then will not appear on the company’s proxy statement.

Every year ICCR members negotiate dozens of these successful agreements. 2017 was a particularly strong year for the ICCR coalition, as we negotiated over 100 corporate commitments on a range of issues. We are able to report that our coalition has already achieved 61 successful withdrawals of 2018 resolutions, putting us slightly ahead of where we were last year. Withdrawal negotiations will continue over the next few months. Assuming the pace of agreements remains consistent with last year, we expect the number of 2018 withdrawals to more than triple by the end of the season.

Note: While ICCR member-sponsored resolutions constitute a large part of the entire universe of ESG resolutions filed each year, still others are filed by institutional and individual investors unaffiliated with our coalition. This is particularly true with regards to governance resolutions, of which  ICCR members file roughly 1/3 to ½ of all those filed. 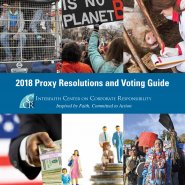 A closer look at our 2018 climate resolutions