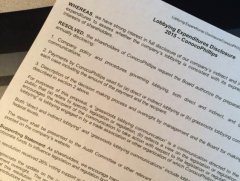 Using a combination of shareholder resolutions and letters, this year faith-based investors are asking 18 major pharmaceutical companies to provide rationale and criteria that justify price increases along with an assessment of the legislative, regulatory, reputational and financial risks they represent to these companies. Separate resolutions are being filed with a subset of these companies on lobbying  disclosure and calling for separating the Chair and CEO roles.

In this resolution, investors are asking 11 pharmaceutical companies to list the rates of price increases year-to-year of our company’s top selling branded prescription drugs between 2010 and 2016, including the rationale and criteria used for these price increases, and an assessment of the legislative, regulatory, reputational and financial risks they represent for our company.

Separately, letters with a similar request around pricing transparency are being sent to six global pharma companies traded outside the U.S.: Astrazeneca, GSK, Novartis, Novonordisk Roche and Sanofi. Read the letter.

Separation of the Roles of CEO and Chair

Investors are simultaneously asking pharma companies to require that the Chair of their Board of Directors, whenever possible, be an independent member of the Board. Further, this policy should be phased in for the next CEO transition. They believe that: the role of the CEO and management is to run the company; the role of the Board of Directors is to provide independent oversight of management and the CEO; and that: there is a potential conflict of interest for a CEO to be her/his own overseer as Chair while managing the business.

In addition, shareholders are asking that companies report on: company policy and procedures governing lobbying, both direct and indirect, and grassroots lobbying communications; payments by the company used for (a) direct or indirect lobbying or (b) grassroots lobbying communications, in each case including the amount of payment and recipient; and, a description of management’s decision making process and Board’s oversight for making payments described above.