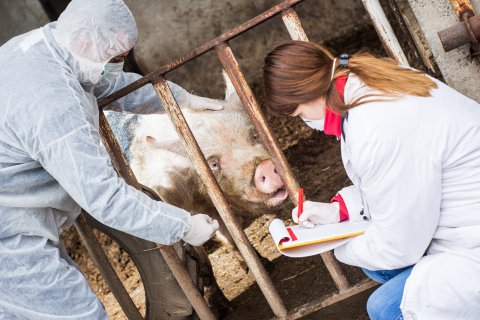 Fast Food Restaurants Commit to Responsible Antibiotics Use
After receiving a shareholder resolution from the Benedictine Sisters, this August, McDonald's announced it would expand its existing policy curbing use of medically important antibiotics in its domestic chicken to its entire global chicken supply chain by 2018. Earlier in the year, the Sisters' resolution had won 30.97% of the vote at McDonald's annual general meeting of shareholders. Green Century Fund and As You Sow spearheaded a shareholder coalition that secured commitments from Jack in the Box, Restaurant Brands (Burger King), Starbucks, and KFC to phase out medically important antibiotics in their chicken supply chains. A Sanderson Farms antibiotics resolution won 30% of the vote.

Respecting Communities & Their Right to Water -- The Dakota Access Pipeline
The Presbyterian Church convinced Phillips 66 -- which has a significant investment in the DAPL project -- to work on strength­ening its human rights and Indigenous rights policies, a necessary part of respecting the Standing Rock Sioux tribe’s human right to water. As You Sow persuaded Morgan Stanley and Goldman Sachs -- which provide capital to the oil, gas and mining sectors and provided financing for the DAPL project – to review their due diligence processes for financing projects with potential community impacts. Enbridge was asked to report on the due diligence processes it uses when reviewing potential acquisitions to identify and address social and environmental risks. The resolution won 30% of the vote.

Water Impacts of Business Operations
Energy utility AMEREN disposes of its coal ash waste in coal ash ponds in the Missouri River flood plain. Coal ash waste contains arsenic, mercury, lead and other heavy metals and toxins. Shareholders asked the company to identify and reduce the environmental and health hazards associated with its past, present and future handling of coal combustion residuals. The resolution won 46.44% of the vote.

Reducing Pesticide Use
Pesticide exposure is strongly correlated with increased cancer. Investors asked Dr. Pepper Snapple to report on its strategies to protect public health and pollinators through reduced pesticide usage in its supply chain; the resolution won 31.6% of the vote. An As You Sow and Maryknoll Sisters reso­lution led Kellogg’s to investigate pre-harvest glyphosate use in its supply chain, and the company’s subsequent commitment to work with investors to develop quantitative metrics for its sustainable agriculture program.

Tyson Invests in Sustainable Protein, Reducing its Carbon Footprint
Responding to increasing consumer preference for plant-based protein which has a lower GHG footprint, and in response to pressure from Green Century Capital Management, Tyson Foods has made a substantial investment in the popular plant-based protein producer, Beyond Meat.